The Book of Gomorrah 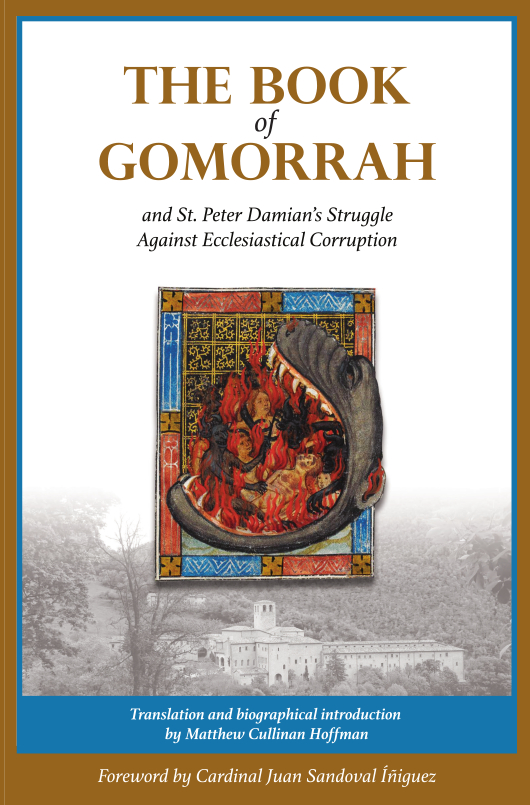 “Alas, it is shameful to speak of it! It is shameful to relate such a disgusting scandal to sacred ears! But if the doctor fears the virus of the plague, who will apply the cauterization? If he is nauseated by those whom he is to cure, who will lead sick souls back to the state of health?”

With these words, St. Peter Damian introduces the Book of Gomorrah, an eloquent and impassioned denunciation of a plague of homosexuality among the Catholic clergy of the 11th century. Although it was written almost a thousand years ago, the Book of Gomorrah is in many ways addressed to our own times, associating the phenomena of clerical homosexuality and pederasty, and endorsing the imprisonment of clergy who are a danger to youth.

This new translation by Matthew Cullinan Hoffman is the most accurate and faithful ever produced in English, and carries a foreword by Cardinal Juan Sandoval Iñiguez, Archbishop Emeritus of Guadalajara. It includes a 10,000-word biographical introduction recounting Damian’s struggle against corruption in the Catholic Church, and a translator’s preface that breaks new scholarly ground and resolves old controversies about the text.

Praise for the Book of Gomorrah:

“It should be certainly known to all that everything that this little book contains has been pleasing to our judgment, being as opposed to diabolical fire as is water.”

—from the preface by Pope St. Leo IX

Praise for the English translation by Matthew Cullinan Hoffman:

“The Book of Gomorrah has recently been translated from the original Latin into English, with copious introductory material, by an erudite Catholic who is faithful to Christ and his Church: Matthew Cullinan Hoffman. I have accepted with pleasure the task of writing this brief presentation of a book which, upon its reading, brings us to the realization that a thousand years ago sexual vices were being practiced by various sons of the Church that lamentably are present today and have been the occasion of scandal, discredit, and apostasy.”

—from the foreword by Cardinal Juan Sandoval Iñiguez, Archbishop Emeritus of Guadalajara

“Hoffman has produced a highly readable translation of St Peter Damian’s most famous work, with a scholarly and helpful commentary placing it into its historical context. As the Church once again confronts the consequences of a collapse of clerical sexual discipline, we do well to read St Peter’s insistence on taking seriously the Church’s early penitential tradition, and the Scriptural references which formed the foundation for this, as well as his zeal for the souls of both sinners and the victims of abuse. Hoffman has done a great service to his readers in preparing this edition.”

“Saint Peter Damian’s language in The Book of Gomorrah will strike many as harsh, but especially when one considers his entire life of holiness, his bluntness is clearly a function of his love for those who have gone very seriously astray. In many ways he showed great kindness, but he realized the danger that would befall the sinner who would not repent of mortal sin, and he cared little for the approval of men, desiring only the approval of his Father in Heaven. With this translation, Matthew Hoffman gives a tremendous gift to the Church, at a time when she desperately needs to hear the undiluted truth, spoken with love, even at the risk of offending.”

“At a time when there is a tragic effort in our societies on both sides of the ocean, to consider normal what it is against nature, Matthew Hoffman has to be strongly congratulated for making accessible the Liber Gomorrhianus (Book of Gomorrah) of St. Peter Damian, an important Doctor of the Church … The translation is clear and well-articulated, rendering the book in elegant English.”

“Peter Damian’s Liber Gomorrhianus (Book of Gomorrah) tackles sexual immorality among Christians, especially clergy and religious, with shocking frankness. Yet his unwavering condemnation of sexual impurity appears alongside laments over the souls of those who have fallen into impurity and exhortations that they rise again. Scholars of ecclesiastical history and a more general audience comprised of those who wonder how today’s struggles with sexual purity may be illuminated by a preeminent reformer of the Medieval period will appreciate this readily accessible and faithful translation of the Liber Gomorrhianus.”

“An excellent and accurate translation, and the most reliable English Version of the Liber Gomorrhianus of Saint Peter Damian (1007-1072). The work of Matthew Hoffman in translating Damian’s from Latin into English shows on the technical side a deep study and an intense commitment to this book and to the language of its author—who lived during the High Middle Ages—and on the conceptual side the will to restore to the English speaking world a book that is a fundamental to the history of our Church. Thanks to Matthew Hoffman we can listen to the voice of Peter Damian against sodomy through this masterpiece that is the Book of Gomorrah.”